Important interactions between the liver and vitamin D – May 2013

D-livering the message: the importance of vitamin D status in chronic liver disease.

Vitamin D is synthesized predominantly in the liver and functions as an important secosteroid hormone with pleiotropic effects. While its key regulatory role in calcium and bone homeostasis is well established, recently there is increasing recognition that vitamin D also regulates cell proliferation and differentiation, and has immunomodulatory, anti-inflammatory and anti-fibrotic properties.

These non-skeletal effects are relevant in the pathogenesis and treatment of many causes of chronic liver disease.

Vitamin D deficiency also closely relates to the severity of non-alcoholic fatty liver disease (NAFLD) and is implicated in the pathogenesis of insulin resistance, a key factor in the development of NAFLD.

The role of vitamin D in the activation and regulation of both innate and adaptive immune systems may explain its importance in the above liver diseases.
Further prospective studies are therefore warranted to investigate the therapeutic impact of vitamin D supplementation in chronic liver disease.

PMID: 22634121 Copyright © 2012 European Association for the Study of the Liver. Published by Elsevier B.V. All rights reserved. 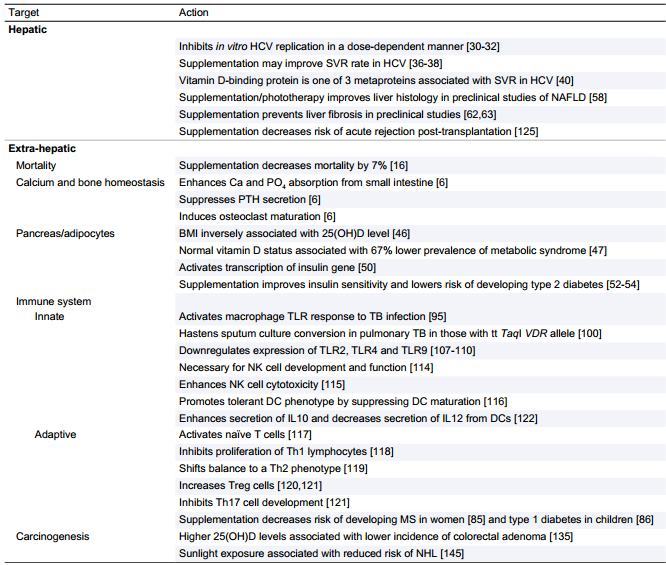 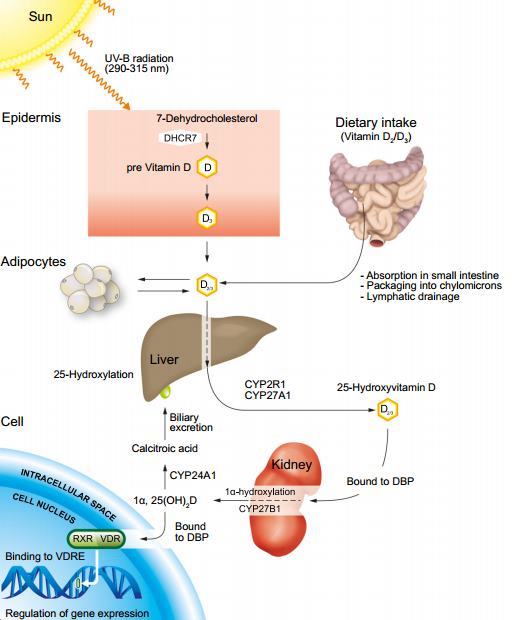 Genes: Liver and other 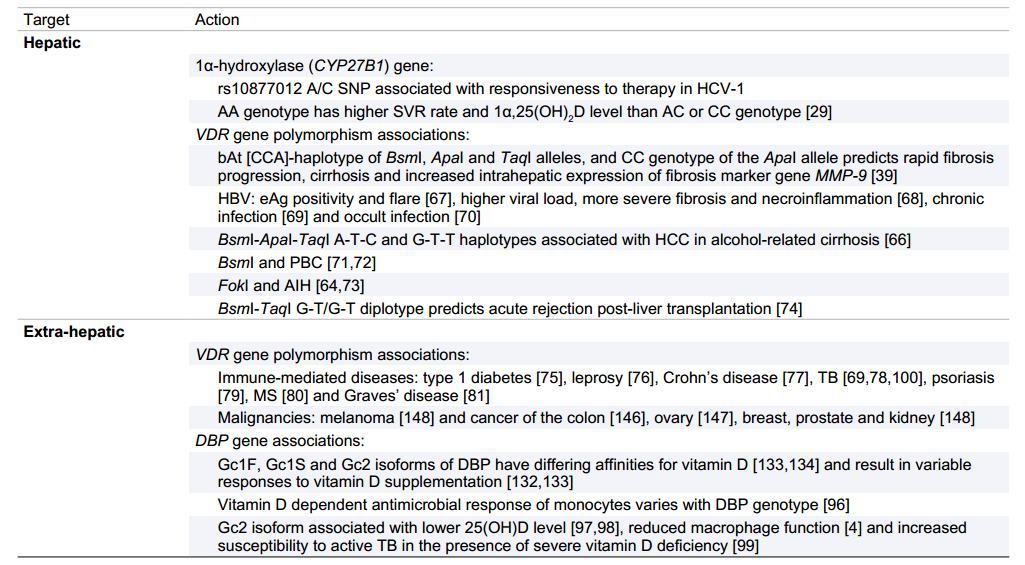 PDF is attached at the bottom of this page

Non-alcoholic fatty liver disease (NAFLD) is the hepatic manifestation of the metabolic syndrome. It is the most common liver disease in the developed world, with a prevalence of 20-30% [43]. Thirty percent of subjects with NAFLD have histologic evidence of non-alcoholic steatohepatitis (NASH) [44] and are at risk of disease progression and development of cirrhosis. The patho-genesis of NAFLD is yet to be fully elucidated, but insulin resistance (IR) is implicated as the key mechanism leading to hepatic steatosis. Apart from lifestyle modification that results in significant weight loss [45], there is currently no safe, effective therapy for NASH.

Vitamin D levels decrease by 1.3 nmol/L with each 1 kg/m2 increase in body mass index (BMI) [46]. Normal vitamin D status is associated with a two-thirds lower prevalence of metabolic syndrome compared to those with reduced levels [47]. In non-diabetic Caucasians low vitamin D levels are independently associated with insulin resistance [48] and are a predictor of increased 10-year risk of developing hyperglycemia and insulin resistance [49]. A vitamin D response element is present in the insulin gene promoter region, and 1a,25(OH)2D activates transcription of the insulin gene [50]. Both 1 a-hydroxylase and the vitamin D receptor are expressed on pancreatic b cells, with an association between low vitamin D levels and impaired b cell function having been suggested [50,51]. Two randomized placebo-controlled trials have shown that high dose vitamin D supplementation improved insulin sensitivity in non-diabetic South Asians [52,53]. A large prospective cohort study of women demonstrated that those who received vitamin D supplementation had a significantly lower risk of developing type 2 diabetes [54].

Subjects with NAFLD have lower vitamin D levels when compared with controls. Low vitamin D levels are closely associated with histologic severity of steatosis, necroinflammation, and fibrosis in NAFLD, independent of age, gender, BMI, Homeostatic Model Assessment (HOMA)-IR score and presence of metabolic syndrome [55,56]. These findings have been confirmed in children with NAFLD [57].

In a recent study of Lewis rats with diet-induced (choline-deficient and iron-supplemented L-amino acid or CDAA) NASH, phototherapy elevated 25(OH)D, and 1 a,25(OH)2D levels while reducing hepatocyte inflammation, fibrosis, and apoptosis when compared to controls. Phototherapy also improved insulin resistance and increased serum adiponectin in association with reduced hepatic expression of the profibrotic transforming growth factor (TGF)-b and a-smooth muscle actin (a-SMA), a marker of hepatic stellate cell activation. In addition, oral vitamin D3 supplementation reportedly improved liver histology in a dose-dependent manner [58]. Furthermore, in a rodent high fat diet model of NAFLD, vitamin D deficiency exacerbated histologic features of NAFLD, increased insulin resistance, and upregulated liver tissue expression of genes involved in hepatic inflammation and oxidative stress [59]. Given the above findings, prospective studies that assess the impact of vitamin D supplementation on the histologic features of NASH are warranted as a priority, given the lack of an effective therapy for this condition.

Vitamin D deficiency is a common problem in chronic liver disease and is closely associated with disease severity. The anti-inflammatory and immune-modulatory properties of vitamin D provide plausible mechanisms by which vitamin D may impact on disease progression and severity, especially in CHC and NASH. However, there are few prospective studies evaluating the effect of vitamin D supplementation in chronic liver disease and these are clearly warranted in the areas of NASH and CHC based on preclinical, and limited retrospective and prospective clinical data. Genetic polymorphisms of the vitamin D receptor and of proteins and enzymes involved in vitamin D synthesis and activation have an association with vitamin D status and severity of liver disease. Further studies are also warranted in this area, to confirm known associations and evaluate other genetic polymorphisms, especially in the vitamin D binding protein, which plays a key role in vitamin D synthesis, activity and bioavailability (Table 5). In the interim period, we recommend vitamin D status to be assessed in all patients with CLD and, if deficiency is present (<50 nmol/L or 20ng/ml), supplementation with 1000-4000 IU/day of vitamin D3 should be initiated, with the initial dose dependent upon baseline 25(OH)D levels. However, increasing evidence suggests that supplementation should be considered for a 25(OH)D level <75 nmol/L, especially in those considering interferon-based antiviral therapy for CHC. Further prospective studies are required to identify an optimal 25(OH)D level in subjects with CLD.

Important interactions between the liver and vitamin D – May 2013         Printer Friendly PDF this page! Follow this page for updates
This page is in the following categories (# of items in each category)
Liver 88 Top news 815