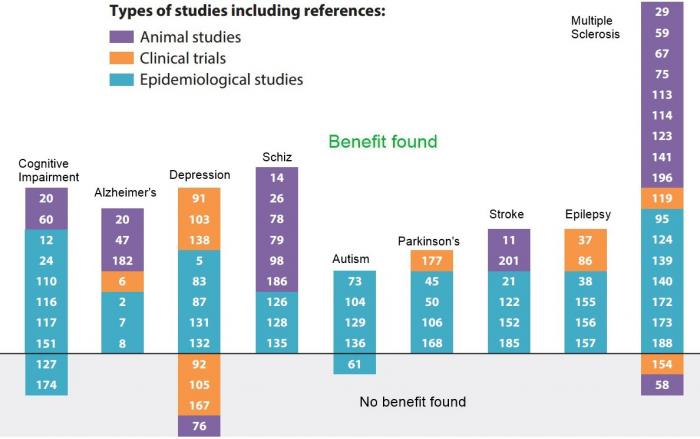 Pages in both of the categories of Intervention AND Cognitive

The Relationship between Symptom Severity and Low Vitamin D Levels in Patients with Schizophrenia.- Oct 2016 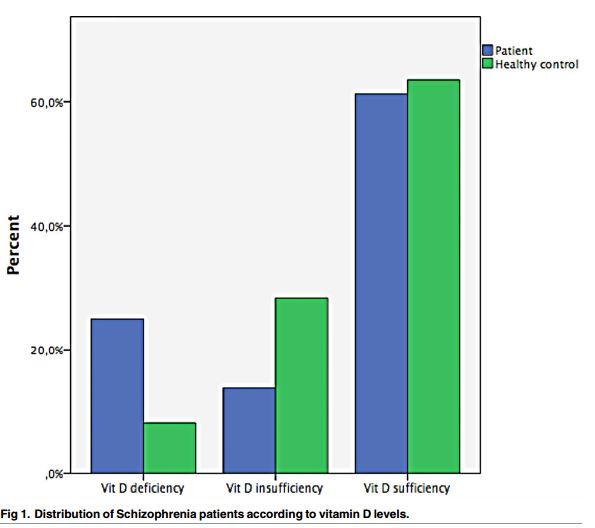 BACKGROUND:
In recent years, the relationship between schizophrenia and environmental factors has come into prominence. This study investigated the relationship between vitamin D levels and the positive and negative symptoms of schizophrenia by comparing vitamin D levels between patients with schizophrenia and a healthy control group.
METHODS:
The study included 80 patients diagnosed with schizophrenia and 74 age- and sex-matched controls. The Scale for the Assessment of Negative Symptoms (SANS) and the Scale for the Assessment of Positive Symptoms (SAPS) were used to evaluate symptom severity. The 25-hydroxyvitamin D (25OHD) levels of all subjects both patients and healthy controls were analyzed in relation to measurements of symptom severity.
RESULTS:
There were no significant differences between the groups in terms of age, sex, or physical activity. Their mean 25OHD levels were also similar (23.46±13.98ng/mL for the patient group and 23.69±9.61ng/mL for the control group). But when patients with schizophrenia were grouped based on their vitamin D levels, the results indicated a statistically significant differences between their vitamin D levels and their total SANS, affective flattening, and total SAPS, bizarre behavior and positive formal thought disorder scores (p = 0.019, p = 0.004, p = 0.015, p = 0.009 and p = 0.019, respectively). There is a negative correlation between 25OHD levels and SANS total points (r = -0.232, p = 0.038); a negative correlation for attention points (r = -0.227, p = 0.044) and negative correlation with positive formal thoughts (r = -0.257, p = 0.021).
CONCLUSION:
The results of this study show a relationship between lower levels of vitamin D and the occurrence of positive and negative symptoms, along with increased severity of symptoms at lower levels of vitamin D, suggesting that treatment for schizophrenia should include assessment of patients' vitamin D levels. We recommend that patients with schizophrenia should be assessed with regard to their vitamin D levels.

Clipped from Discussion
Of the schizophrenia patients who participated in our study,

The healthy controls in our study showed 8.1% deficient, 28.4% insufficient and 63.5% sufficient levels of Vitamin D. Although the deficient percentage among the schizophrenia patients was higher, the levels found for vitamin D in our schizophrenia patients and healthy controls was not statistically significant.
– – – –
The differing results obtained in these studies could be the result of factors like darker complexions and geographic differences in where the studies were conducted.
Other factors may also make a difference for instance differences in phases of the disorder like acute or chronic stages. Also differences were observed between patients experiencing acute exacerbation and those in remission.
Greater levels of negative and positive symptoms may

This may also account for lower levels of vitamin D in patients undergoing acute episodes of schizophrenia when compared with more similar levels in those in remission and in controls. It is also possible that the different scores could be a result of taking blood samples during different seasons of the year. Studies done by Graham et al. and Yuksel et al. [16,17] like ours, took care to gather blood samples during the same season. This could be a reason for the similar results obtained by our study and these others.
– – – – –
Associations between Vitamin D deficiency and obesity, smoking, and lack of physical activity have been shown in previous studies [40-43] and we analyzed those variables in the current study as well. Although there were significant differences between healthy controls and our patient group in terms of obesity and smoking, there was no statistically significant difference in their vitamin D values. Our study did not look carefully at nutrition and patients who took supplemental vitamin D. We know that, other than supplements, sunlight exposure is the primary source of vitamin D for the majority of people [44]. In our study, the similarity of vitamin D levels, despite large statistical differences between our schizophrenia patient group and controls in relation to smoking and obesity, supports the idea that sunlight is a very important factor. When patients with schizophrenia were grouped according to their levels of vitamin D deficiency, there were no statistically significant differences in terms of obesity and smoking between the groups. This finding strengthens the finding of a relationship between vitamin D deficiency and symptom severity.

Note: This study considerst vitamin D blood levels, not cell levels (3 genes can block cell levels and not be seen by blood tests) 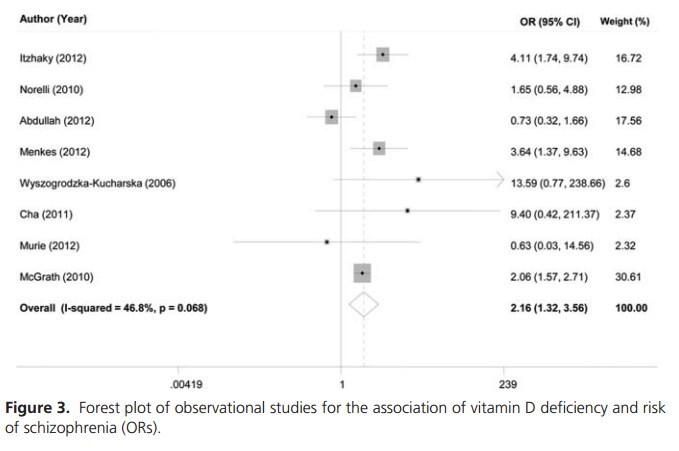 New Zealand study shows that vitamin D deficiency is common in psychiatric inpatients, - 2012%%%particularly among patients with schizophrenia and those of Maori descent.

BMC Psychiatry 2012; 12: 68 Provisional PDF attached at the bottom of this page
Highlights

Psychotic are 3.5X more likely to be vitamin D deficient or have dark skin - 2012

BACKGROUND: Vitamin D deficiency is a re-emerging epidemic, especially in minority populations. Vitamin D is crucial not only for bone health but for proper brain development and functioning. Low levels of vitamin D are associated with depression, seasonal affective disorder, and schizophrenia in adults but little is known about vitamin D and mental health in the pediatric population.

METHODS: One hundred four adolescents presenting for acute mental health treatment over a 16-month period were assessed for vitamin D status and the relationship of 25-OH vitamin D levels to severity of illness, defined by presence of psychotic features.

Study: Low vitamin D linked to psychosis in teens May 2012

Posted on May 24, 2012 by John Cannell, MD
Psychosis, or loss of touch with reality, is difficult to see in any loved one but is particularly difficult to deal with if it’s your teenager.
Dr. Barbara Gracious and colleagues recently discovered that of 104 teenagers assessed at an acute mental health clinic, the teenagers with the lowest vitamin D levels were more likely to be psychotic.
In what must be a tribute to video games and the like, 72% of the teenagers had vitamin D levels lower than 30 ng/ml and 34% had levels lower than 20 ng/ml.

The magnitude of the vitamin D effect was not minor; if the teenager had low vitamin D levels, he or she was almost four times (OR=3.5) as likely to be psychotic.

I was disappointed with their usual call for more studies instead of the needed call to treat vitamin D deficiency now. Compare Dr. Gracious’s approach to that of Dr. Mats Humble’s approach at Sweden’s Karolinska Institute. Dr. Humble and colleagues assessed 117 mental health outpatients of all ages and found that teenagers had the lowest levels. Teenage females had vitamin D levels of around 20 ng/ml and, in another nod to video games, teenage Swedish males attending a mental health clinic had average vitamin D level of around 10 ng/ml.

Dr. Humble also found that depressed, psychotic and autistic patients had the lowest vitamin D levels and anxiety patients had the highest levels.
Instead of just calling for more trials, he treated the deficient patients with up to 4,000 IU/day of cholecalciferol or, in other cases, up to 70,000 IU weekly of ergocalciferol, which resulted in “considerable improvement” in psychosis and depression.

Incidence of Schizophrenia and Other Psychoses in England, 1950–2009: A Systematic Review and Meta-Analyses (dark skin)

25-Hydroxyvitamin D (25(OH)D) deficits have been associated with schizophrenia susceptibility and supplementation has been recommended for those at-risk. Although the mechanism by which a deficit confers risk is unknown, vitamin D is a potent transcriptional modulator and can regulate proline dehydrogenase (PRODH) ex

This study presents a mechanism by which 25(OH)D insufficiency confers risk of schizophrenia; via proline elevation due to reduced PRODH expression, and a concomitant dysregulation of neurotransmission. Although definitive causality cannot be confirmed, these findings strongly support vitamin D supplementation in patients, particularly for those with elevated proline, who may represent a large subgroup of the schizophrenia population.

AIM: Deficient vitamin D levels are very common among Americans of all ages and ethnicities, but little is known about its prevalence or associated problems among those with schizophrenia.

RESULTS: There was no significant difference in mean 25 OH vitamin D between the schizophrenia and the healthy comparison subjects (28.2 standard deviation (SD) 12.6 ng mL-1 vs. 29.9 SD 14.3 ng mL-1 ), and about half the subjects in each group had insufficient levels (<30 ng mL-1 ). Among psychosis subjects, greater severity of negative symptoms was correlated with lower vitamin D status (r = -0.55, P = 0.012); the correlations of overall symptom severity and positive symptom severity with 25 OH vitamin D levels approached significance (r = -0.42, P = 0.07 and r = -0.36, P = 0.12, respectively). There was no relationship of vitamin D with depressive symptoms. Among the schizophrenia subjects, lower 25 OH vitamin D levels were associated with more severe overall cognitive deficits (r = 0.56, P = 0.019). 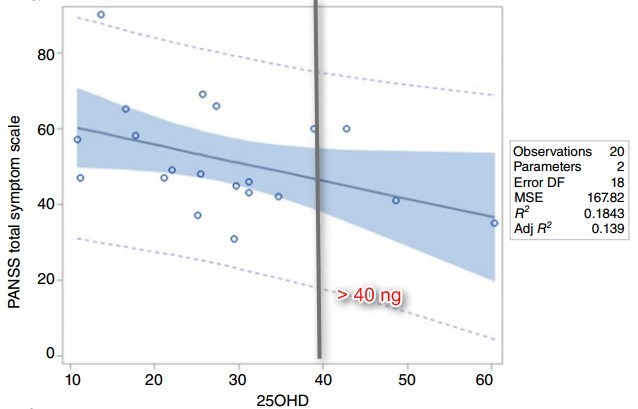 RESULTS: Hypovitaminosis D has been found in 21.4% of the subjects and none of them had received vitamin D supplementation in the previous 12 months. In multivariate analysis, hypovitaminosis D has been significantly associated with respectively higher depressive symptoms (aOR = 1.18 [1.03-1.35], p = 0.02) and current anxiety disorder (aOR = 6.18 [2.15-17.75], p = 0.001), independently of age and gender. No association of hypovitaminosis D with respectively positive and negative symptoms, cognitive scores or other biological variables has been found (all p > 0.05), however, a trend toward significance has been found for metabolic syndrome (p = 0.06).

Reporting on: Effect of Cannabidiol on Medial Temporal, Midbrain, and Striatal Dysfunction in People at Clinical High Risk of Psychosis A Randomized Clinical Trial
&nbspDownload the PDF from Sci-Hub via Vitamin D Life
fMRI brain scans 4 hours after ingesting 600 mg of CBD
No indication of long-term benefit (only a single fMRI was taken)

Overview Schizophrenia and Vitamin D         Printer Friendly PDF this page! Follow this page for updates
This page is in the following categories (# of items in each category)
Overviews 76 Top news 815 Cognitive 290