Calcium and Vitamin D Supplementation for Prevention of Preeclampsia: A Systematic Review and Network Meta-Analysis.

As with virtually all other meta-analyses, the dose sizes were ignored.
Vitamin D charts from GrassrootsHealth - May 2016 has the following chart 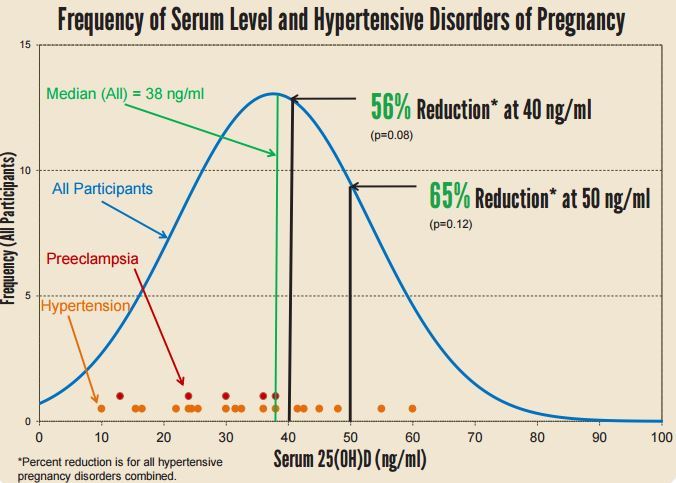 Pages listed in BOTH the categories Pregnancy and Hypertension (preeclampsia)

Vitamin D supplementation effects with or without calcium in pregnancy for reducing risk of preeclampsia and gestational or pregnancy induced hypertension are controversial. Literature was systematically searched in Medline, Scopus and Cochrane databases from inception to July 2017. Only randomized controlled trials (RCTs) in English were selected if they had any pair of interventions (calcium, vitamin D, both, or placebo). Systematic review with two-step network-meta-analysis was used to indirectly estimate supplementary effects.
Twenty-seven RCTs with 28,000 women were eligible. A direct meta-analysis suggested that calcium, vitamin D, and calcium plus vitamin D could lower risk of preeclampsia when compared to placebo with the pooled risk ratios (RRs) of 0.54 (0.41, 0.70), 0.47 (0.24, 0.89) and 0.50 (0.32, 0.78), respectively.
Results of network meta-analysis were similar with the corresponding RRs of 0.49 (0.35, 0.69), 0.43 (0.17, 1.11), and 0.57 (0.30, 1.10), respectively. None of the controls were significant. Efficacy of supplementation, which was ranked by surface under cumulative ranking probabilities, were: vitamin D (47.4%), calcium (31.6%) and calcium plus vitamin D (19.6%), respectively. Calcium supplementation may be used for prevention for preeclampsia. Vitamin D might also worked well but further large scale RCTs are warranted to confirm our findings.

Preeclampsia reduced 2X by Vitamin D, by 5X if also add Calcium – meta-analysis Oct 2017         Printer Friendly PDF this page! Follow this page for updates
This page is in the following categories (# of items in each category)
Pregnancy 750 Vitamin D and Calcium 192 Meta-analysis of Vitamin D 480 Hypertension 134